Hello aspiring hackers. In this article we present you a meterpreter cheat sheet. Since I am writing  many howtos on how to exploit different vulnerabilities in both web and operating systems using Metasploit, I thought may be it would be very helpful for beginners to make a guide to Meterpreter since it is the most widely used payload for our exploits. That begs the question as what is a payload which further begs the question of what is an exploit.

Now let us define payload. A payload defines what exactly we want to  do after a system is exploited. And here, meterpreter is our payload.  Meterpreter has lot of advantages over other payloads. It is powerful, extensible and most importantly stealthy. It uses encrypted communication, writes nothing to disk and doesn’t create any new processes. Ok, Ok, Ok. That’ s lot of theory. Now let’s get to the main concept of this howto. For this howto, I have exploited a Windows system with Kali Linux and acquired a meterpreter session. As soon as you get the meterpreter session, type “?” or “help”. This will give all the commands available with meterpreter. In this Part 1. we will see all the file system commands. As the name implies these commands are used in filesystem manipulation. 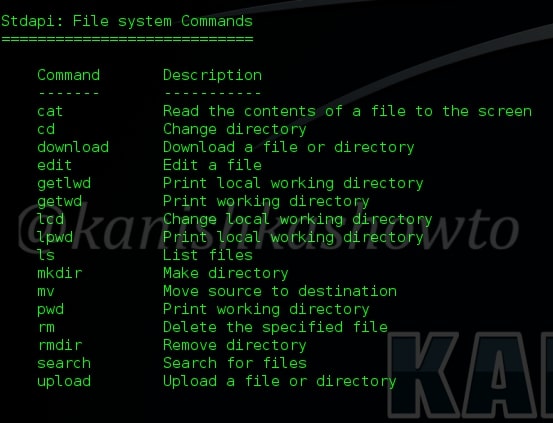 “cd” stands for “change directory”. This command is used to change our working directory in the remote machine. The command “cd ..” means going one directory back. Here we did it twice to go to the “C:\” directory.

The “cat” command allows us to create single or multiple files, see contents of file, concatenate files and redirect output in terminal or files as we require. Here, we will use the “cat”  command to view the contents of the file h323log present on the remote system as shown below. 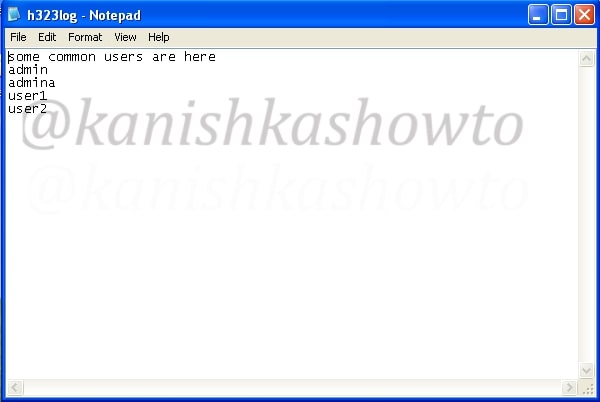 “edit” command is used to edit the file. It will open the file in Vi editor in which we can make changes as shown below.

Here I have deleted two lines in the file. 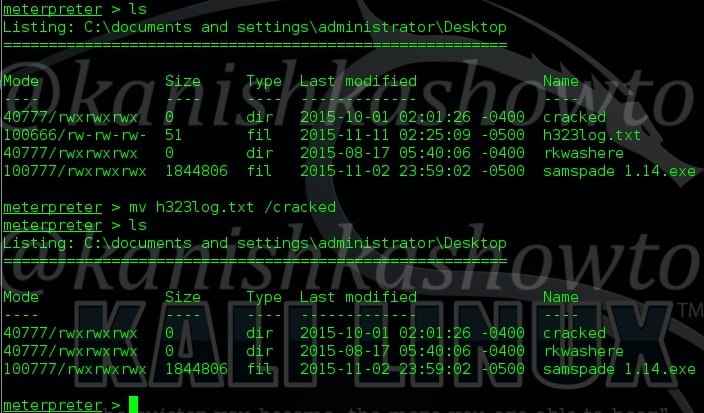 The “search” command is used to search for specific files in the remote system as shown below.

The “lcd” command is used to change the local working directory as shown below.

The “rm” command is used to delete files in the remote system. We use this command generally to delete any executable files we have uploaded so that our victim doesn’t get any suspicion.

The “rmdir” command is used to delete directories since “rm” command cannot do it. Its usage is shown below. 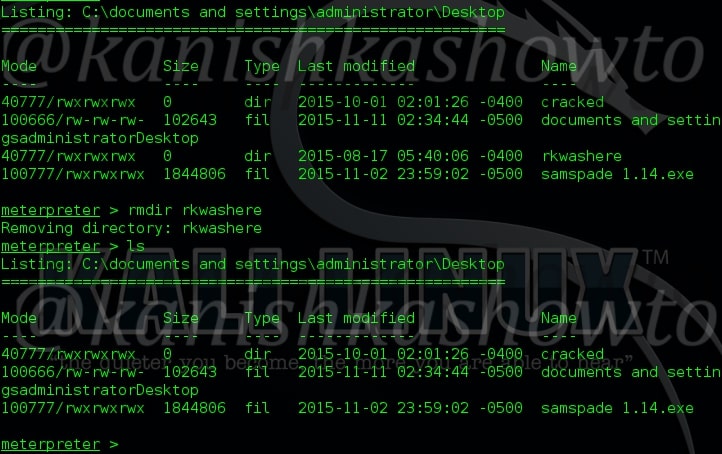 The “mkdir” command is used to create new directories or folders on the remote system as shown below.