“When the time for the march of one’s enemy’s army has approached, one has to obstruct the enemy or send him far away, or make his movements fruitless, or, by false promise, cause him to delay the march, and then deceive him after the time for his march has passed away. One should ever be vigilant to increase one’s own resources and frustrate the attempts of one’s enemy to gain in strength.”

Webserver Banner grabbing or fingerprinting is the method of gaining information about the target host OS. web server type, version etc. Once the hacker gets the needed information about the target OS etc, he can easily find out the vulnerabilities present in particular version and launch his attacks against it. Today we are going to see how webserver banner grabbing is performed on web servers and how to apply counter measures to it. We will see Apache and IIS 8 server examples in this article.

Imagine I have set up a website named www.shunya.com on an Apache server. A hacker can easily find Information about the web server in different ways. For example, a hacker can visit the website and and try to open a webpage which is not existent on my server, like below. 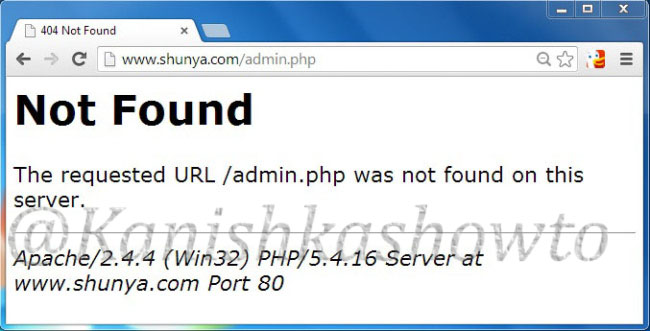 In the above example, hacker tried to open page named “admin.php” which was not available on my server and in turn the server responded with a type of web server, the target OS and the scripting language. This is giving out too much information.

The traditional and popular way of fingerprinting is through telnet. A hacker opens command line or terminal. and types the command “telnet www.shunya.com 80″. When the screen goes black, type “HEAD / HTTP/1.0″ and this will give the server information.

There are also many fingerprinting tools available. I am gonna show you only one, Id serve. Let’s see how to banner grab using Id serve. 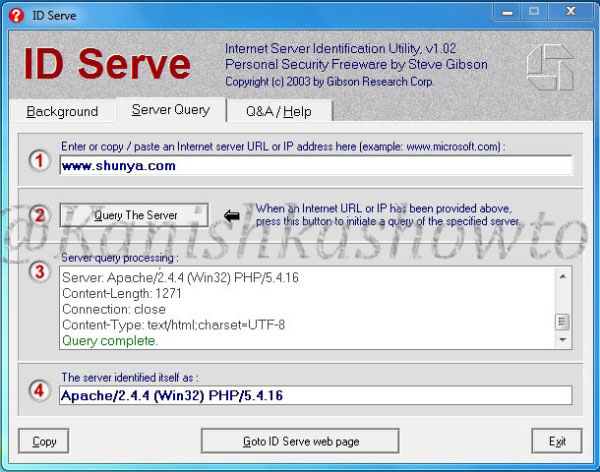 Now what are the preventive measures we can take in Apache server to disable or atleast prevent fingerprinting to some extent. Apache web server has a configuration file called “httpd.conf” where we can make changes to fight fingerprinting. Go to httpd.conf and change the value of the option “Server Signature  to off”. This will not display any information about server when an nonexistent page has been accessed.

In the httpd.conf file, changing the value of “Server Tokens” from “Full” to “Prod” will only show the minimum server information as shown below. 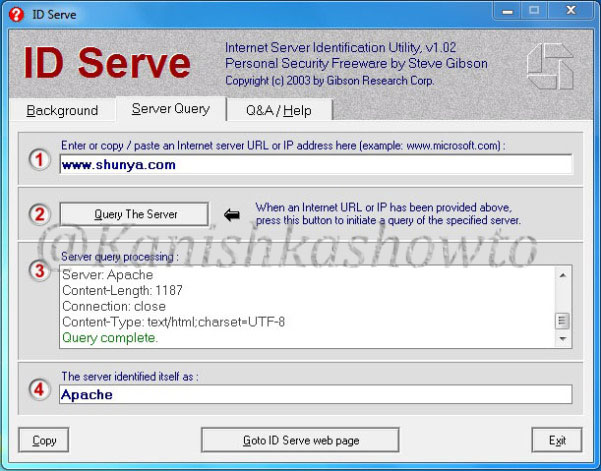 This still discloses that our web server is Apache but it doesn’t show the version. In Kautilya’s words this is delaying the march of enemy. Here are the options we set. 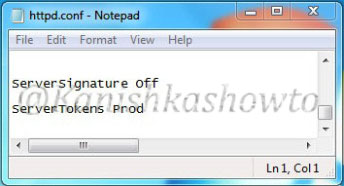 Now imagine we changed our www.shunya.com website from Apache server to the latest version of Microsoft web server, IIS 8. To prevent error pages form revealing any information in IIS server, we can set custom error pages.  Now let’s use IDserve tool to fingerprint the IIS 8 server. 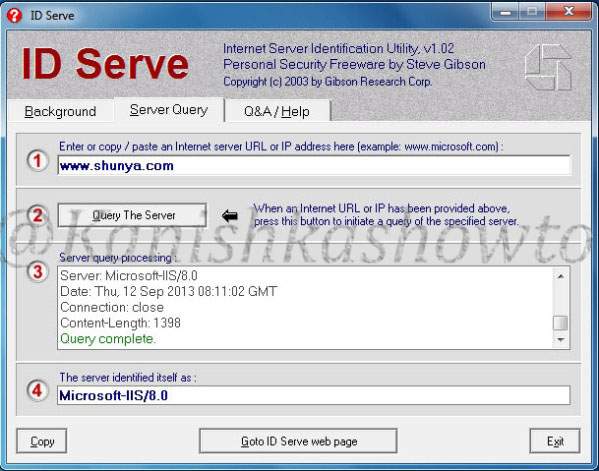 It shows the server version. Now how can we prevent this. Microsoft provides a tool named UrlScan freely available for download which can be used easily to process HTTP requests. Download this tool and install it. ( See how to configure Urlscan for IIS 7.5 and IIS 8 ). Then go to the configuration file of UrlScan, “UrlScan.ini” located at “C:WindowsSystem32inetservUrlscan” by default and change the value of “RemoveServerHeader’ from “0″ to “1″. 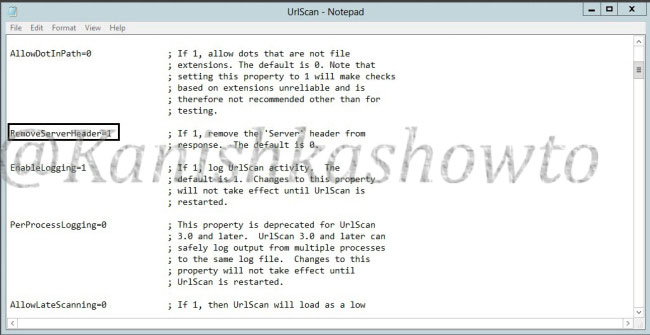 This will not reveal the server version information as shown below. 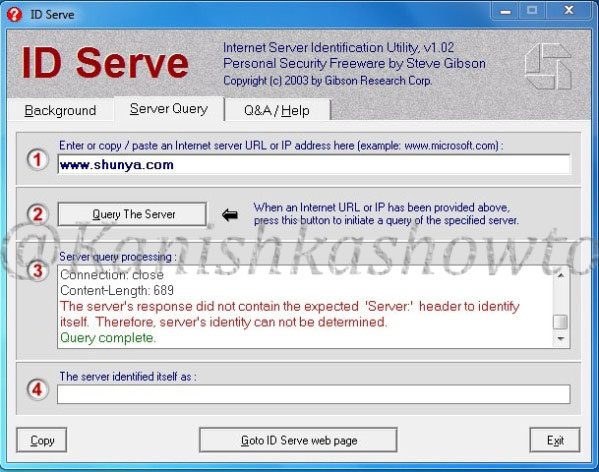 We can further mislead the attacker by setting our server name to some other value different than our original one. This can be done by setting the value of “RemoveServerHeader” to “0 “and changing the value of “AlternateServerName” to the value we want to specify ( in our example Nginx ). 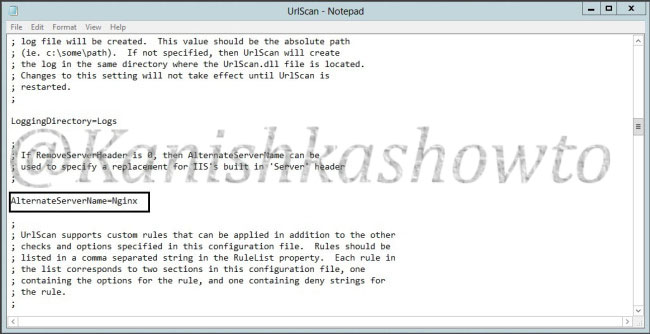 So when the attacker tries to fingerprint our website, he will be misleaded. 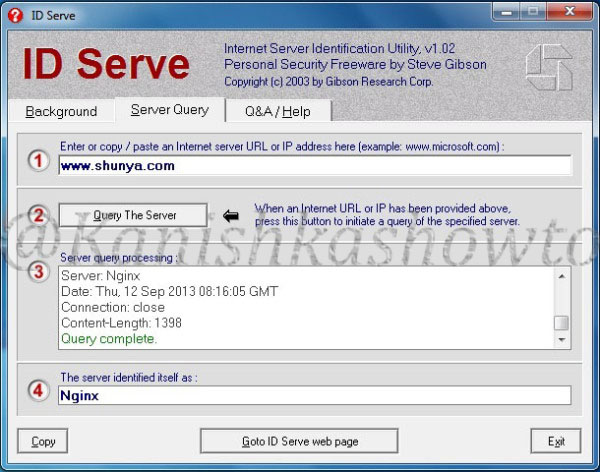 Note: Taking this preventive measures will not stop a determined hacker to find out our server information.

UrlScan is a security tool used to restrict types of HTTP requests that IIS will process. It is a simple tool which is very helpful in blocking harmful requests to the server. It seemingly supports only IIS 5.1, IIS 6.0, and IIS 7.0 on Windows Vista and Windows Server 2008. It has been deprecated since IIS 7.5 and IIS 8. It is said that Microsoft has included the features of UrlScan in request filtering option for IIS 7.5 and IIS 8. But it definitely is not a match for the simplicity of UrlScan. Today I am going to show you how to configure UrlScan in IIS 7.5 and IIS8. (IIS 7.5 is available in Windows server 2008 R2 and IIS 8 is available in Windows Server 2012 and Windows 8 ).

I am going to configure this in Windows server 2012 i.e IIS 8 but do not worry the configuration steps are similar in IIS 7.5. First and foremost install Web Platform Installer in your machine. This will help us to install all the components we require in simple steps. From web platform installer, select component IIS 6 metabase compatibility. This is compulsory to install URLscan. 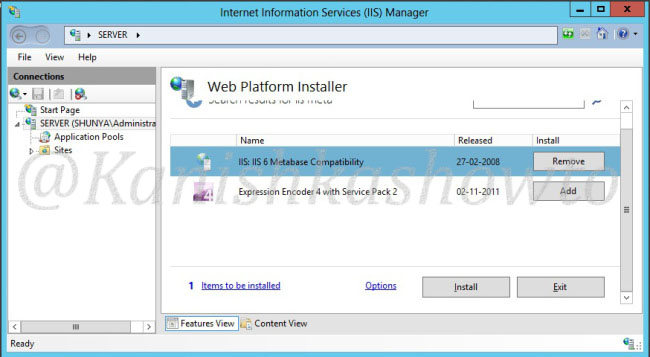 Then, select IIS ISAPI Filters. (ISAPI filters may already be installed in IIS 7.5 ). 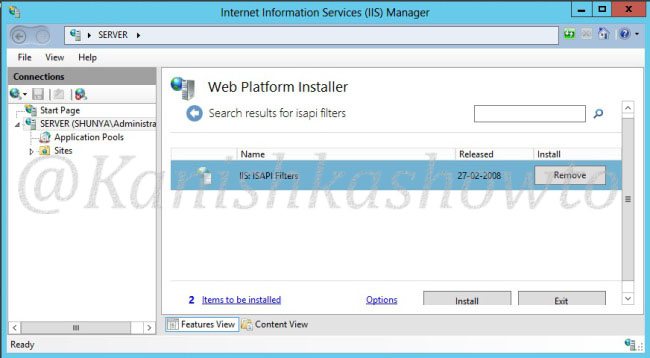 Click on Install. You are shown a review of components you selected to install. Click on I accept. 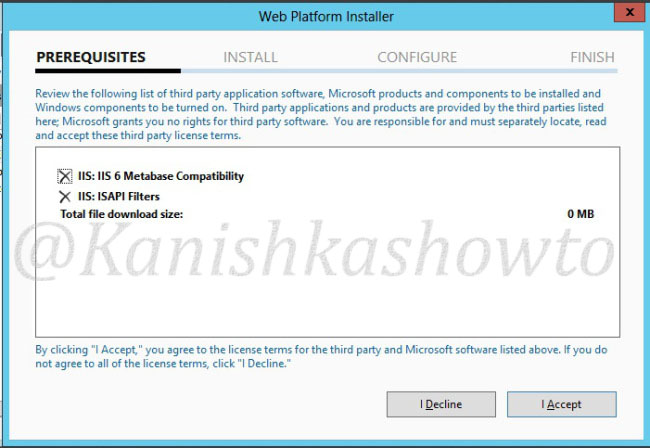 The components are installed and will show you a Finish screen. Click on Finish. 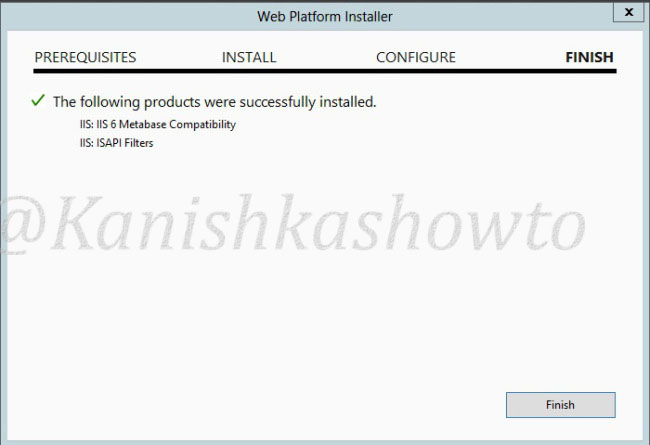 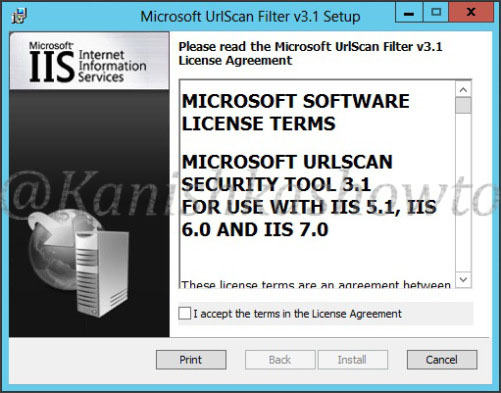 The installation is very quick. Once it finishes,click on “Finish”. 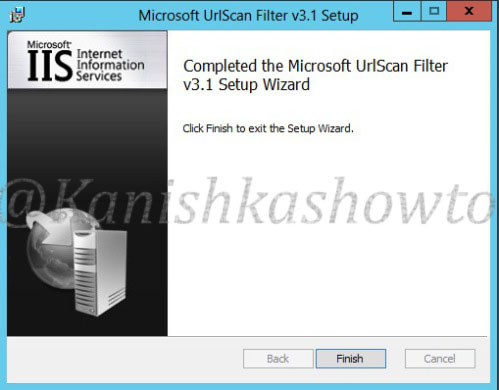 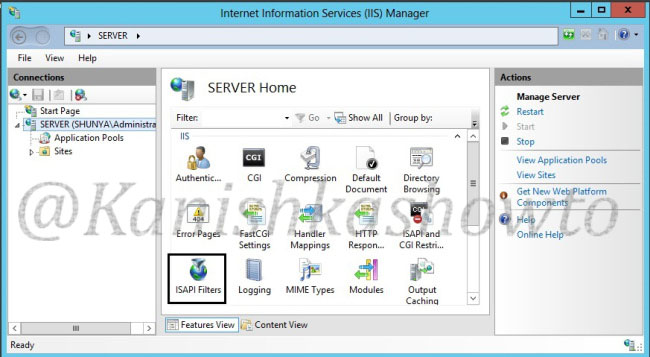 If everything went well, we should see a filter already set like below. 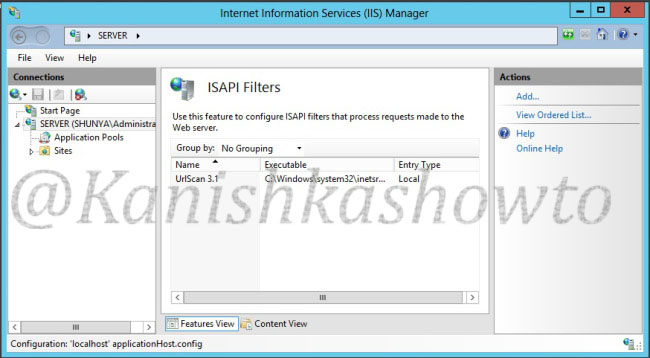 Click on it. We can see that there is already a filter named URLscan 3.1 linking to the executable urlscan.dll. 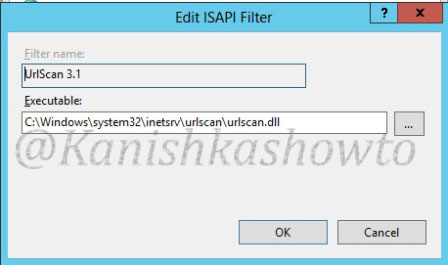 Before configuring UrlScan, let’s try a little banner grabbing to check whether UrlaScan is working or not. For this, we will use tool Idserve to fingerprint the server on which we have configured UrlScan. (www.shunya.com is fictional website i set on my server ). 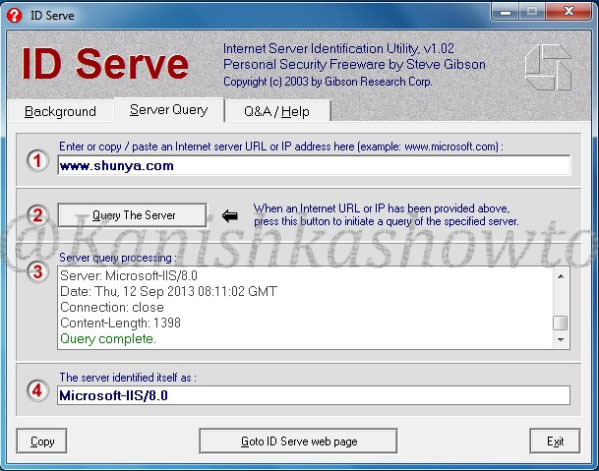 We can see that the version is Microsoft-IIS/8.0. Now let’s go to the configuration file of urlscan (urlscan.ini)  to make some changes to it.  It is located by default at “C:WindowsSystem32inetservurlscan” and change the value of “RemoveServerHeader” to “1” from “0”. Save the file. 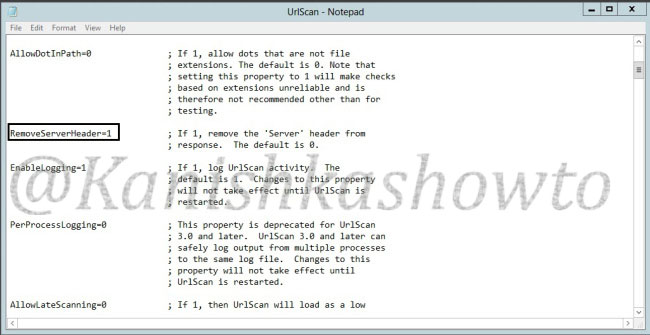 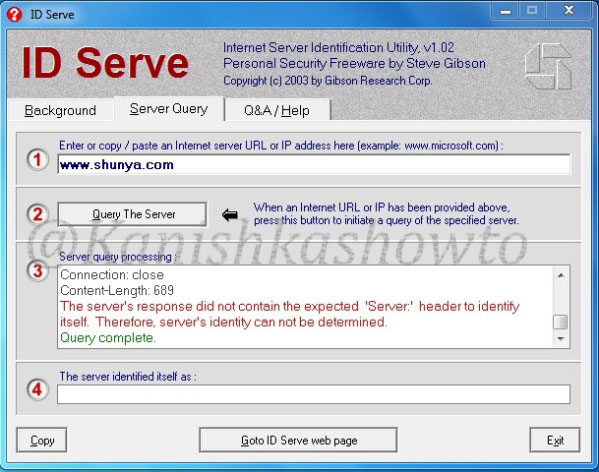 We can see that the server version has not been disclosed hence our UrlScan is working successfully. Hope it was helpful.

Select the components you want to install. I have selected IIS, PHP and MYSQL.

After selecting the applications you want to install, click on “Install”. If you have selected MYSQL, it will prompt for a password to be set for MYSQL. Enter the password and click on “Continue”.

It will display a summary of components which will be installed. Click on “I Accept”.

Now let’s test our php. Go to the root directory which is “%systemroot%/inetpub/root” in IIS and create a php file with the following script and save it as version.php ( in fact any name but with php extension. )

Now go to address “http://localhost/version.php” from the browser.

If it displays the version of the php installed, then our php installation has been successful. Hope this was helpful.